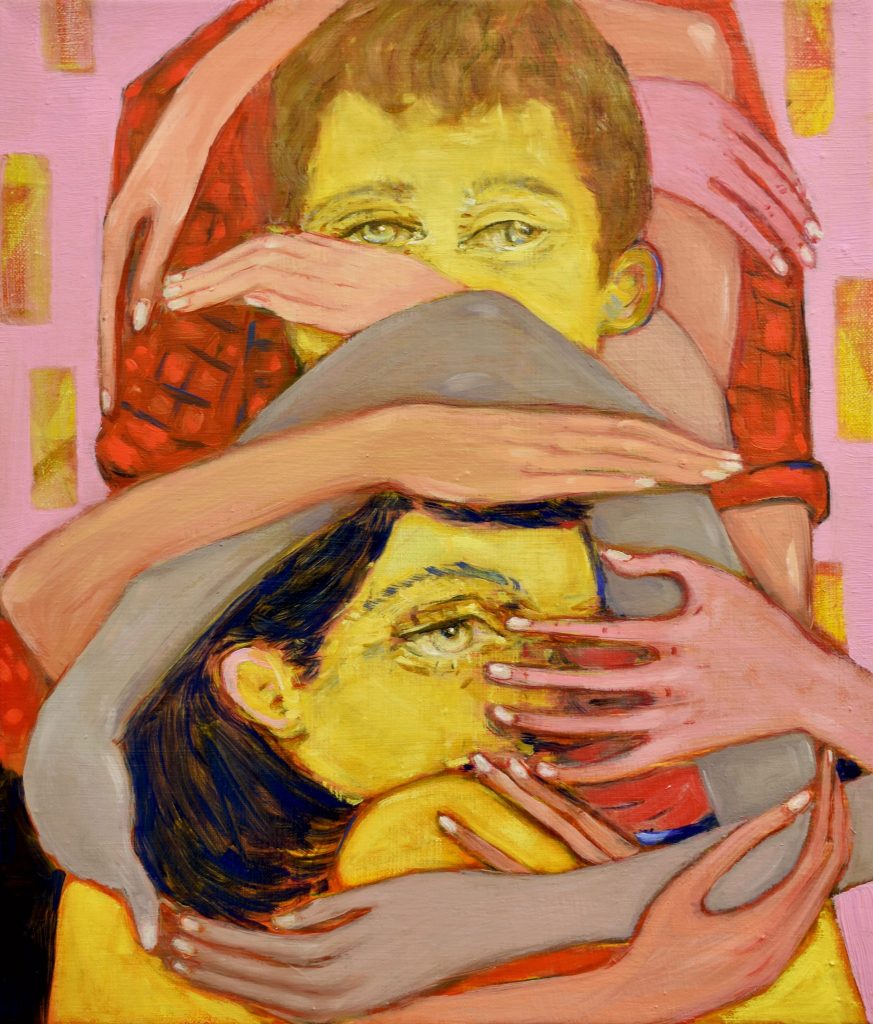 For this fresh and current selection, New Art Projects proposes a new look and investigation into contemporary painting being made in the UK today.  This selection demonstrates the galleries commitment to women artists presented in this especially curated booth.

London Based painter Aly Helyer’s artwork is figurative and its focus lies within colour and form. Her pallet is vivid and her marks waver above the canvas, teasing out a feature of a figure, before dissolving again into colour. Her paintings are suggestive and fleeting and her approach to painting is very fluid and her subject matter stems from a psychological  and art historical approach to her work., which  is strongly influenced by artists such as Pontormo, and reflects upon Renaissance and Medieval art.  She has been exhibiting in London since the 1990’s

Frances Wilks confronts the male dominance of formula 1 by implanting herself within the work, replacing a man in almost every picture to challenge a media that traditionally excludes women. She utilises the lack of female appearances in Formula 1 to question gender notions and explore new possibilities for the traditional representation of masculinity. Her paintings are reminiscent of early Marlboro, Ferrari and Champion advertising and the language of men’s magazines with their vibrant colours and graphic compositions. They are, according to Frances, ’racing cars in capitalist colours’. They are images that that question the speed of life.

Lindo Khandela is a UEL graduate who studied at her MA in painting at the Royal College of Art. She specialises in mixed-media paintings which are chaotic, vivacious and bursting with colour. Lindo’s themes are bold and unapologetic, detailed with glittering layers of patterns which are heavily influenced by her South African cultural background. Her choice of subject is often deeply personal, gleaming with social issues and wilfully playful.

During the last two years, painter Kate Halsall has embarked on a very specific project, to capture her subjects while sleeping. Artists have always had a fascination for the recumbent form of a sleeping figure, and the idea that something beyond our ordinary conscious self is revealed during the time we are asleep.

Halsall has gathered images of people who have found themselves asleep for a number of different reasons.

Paige Perkins is an American born artist based in London. Her work reflects a personal folklore where the borders between human and animal, fantasy and reality dissolve. The paintings reveal a visionary world where time and space unfold with a strange logic that springs from darker sources such as myths, pagan mysticism and fairytales. Perkins attended the Turps Banana Art School from 2014 to 2016 and holds an MFA from University of Brighton 2006. Her work is held in various private collections in the UK and abroad.