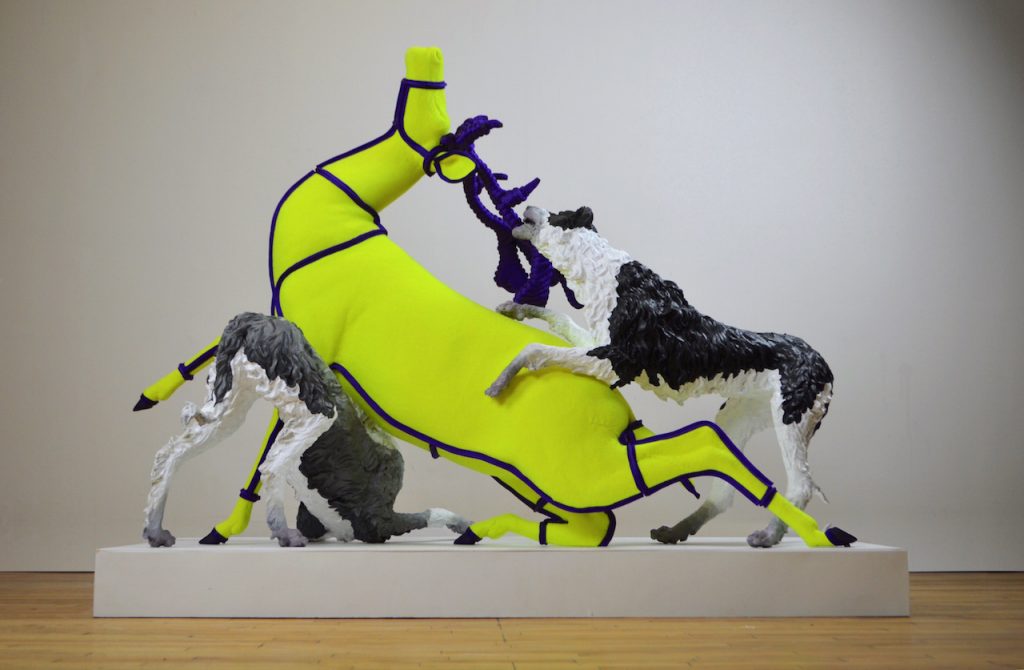 The End Of The Chase

In his recent works sculptor Nicholas Crombach uses the markers of tradition to critique social rituals. Through the employment of the mythology and the rich visual culture of the hunt, Crombach assembles works which revel in contradiction. He has created a series of unexpected juxtapositions that examine the cultural significance and the complex issues percolating around hunting and sporting traditions in the 21st century.

For this exhibition, Crombach riffs off the myth of Diana and Actaeon, which provides a poignant framework for his theme. In the original story, Actaeon, the hunter and grandson of King Cadmus, is in the forest with his dogs, when he spies Artemis (Diana) in her bath attended by her nymphs. Diana was the goddess of the hunt, but when the mortal Actaeon sees her, her nymphs try to cover her modesty. She splashes him with water, turning him from a mortal man into a stag, who flees into the forest only to be hunted down and killed by his own dogs. The hunter becomes the hunted.

Crombach’s Fetch (2018) refers to the mythology of Diana and Actaeon as he transforms the lofty and classical story of metamorphoses into a game of fetch in the local park, constructed on a grand scale. In Fetch (2018), Crombach creates a hybrid between the art historical imagery from paintings of hounds hunting stags with the flashy colours and synthetic materials of modern day dog chew toys. The sculpture is displayed alongside a variety of chew toys that act as an index for the sculptures interpretation, some transformed into porcelain that has been marked with the aristocratic hunting motifs found on antique English pottery. Here, the assembly of works create a conversation on the blurred boundaries between: histories of domestication, the working relationships we have with animals, contemporary issues of hunting as “play”, tradition and survival.

A second major new sculpture “End of the Chase” is a collapsed version of a Victorian period rocking horse housed in London’s V&A Museum Of Childhood. The sculpture responds to the 2014 hunting act that passed in Britain which in turn attempts to obliterate the tradition of hunting with hounds, most commonly associated with the fox hunt. The original rocking horse symbolises the innocence inherent in the sculpture’s visual forms, where as the exhausted rocking horse sculpture deals with ideas of the hunt and the collapse of the hunt-as-institution. “End of the Chase” intends to refer to the ending of this tradition while questioning if that was indeed a victory.

Finally, Crombach presents a stunning pair of Diana and Actaeon (2016) statues based directly on the famous Houdon sculpture that caused a sensation in 1777 now housed in the Louvre. However, rather than depicting the goddess as a radiant beauty, she appear as a modern middle aged woman holding a broken bow. Actaeon appears as a pot bellied man: their myths have been disturbed as they confront each other face to face, impending Actaeon’s transformation.