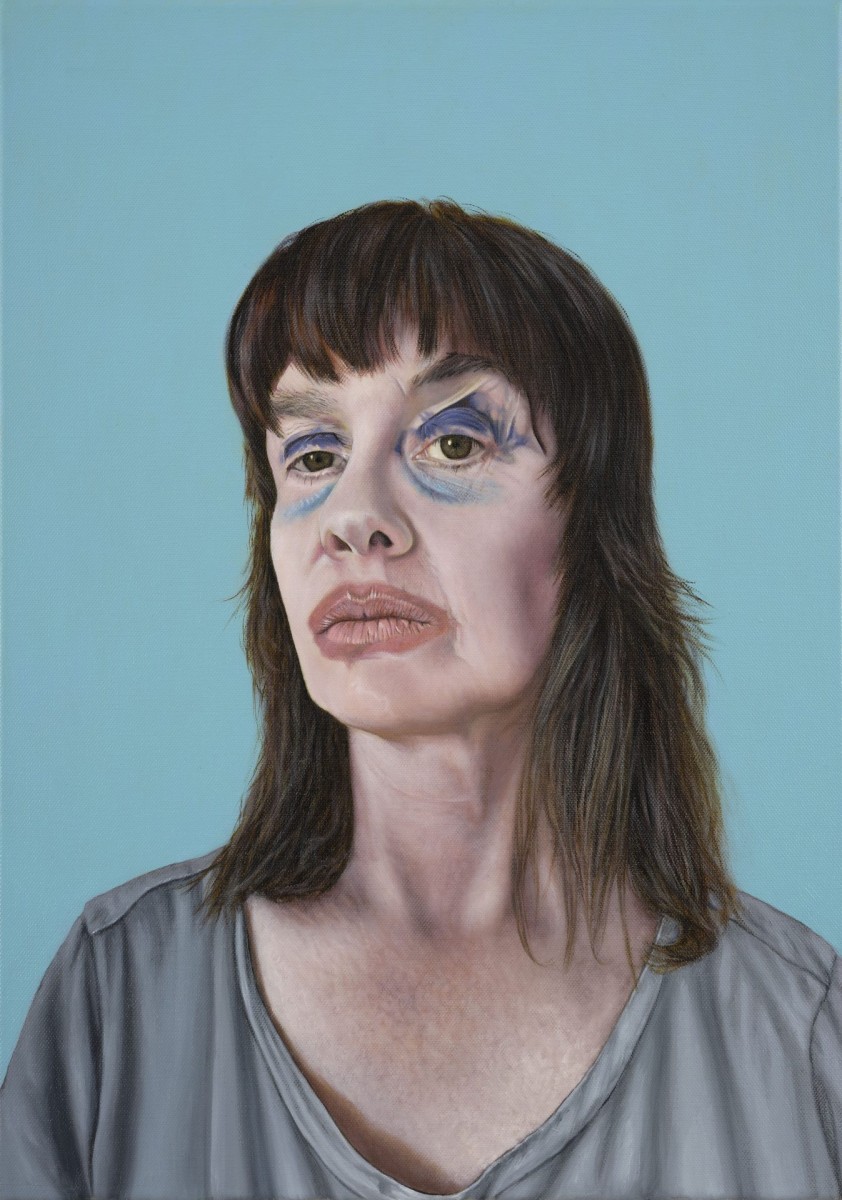 For her first solo show at New Art Projects British Painter Sadie Lee has taken the title from Shocking Blue, a Dutch-based Rock / Pop band from the late 60’s/early ’70s whose biggest hit was Venus. In this show, Lee looks at gender through this lens and finds a contemporary vision of Venus that explores both gender and identity.

Lee has made six new portraits of Academy Award-winning costume designer Sandy Powell. The paintings are displayed in pairs, representing the front and back of the same pose, which mirror the style of costume designs. The reverse pose suggests the pictorial trope of the ‘Rückenfigur’, particularly the Caspar David Friedrich painting ‘Wanderer Above The Sea Of Fog’, which this pose closely resembles.

Sadie Lee is aware of these poses resembling old-fashioned paper dress dolls where you can change the outfits with fold-over tabs. As a result here the costume designer becomes the vehicle for the costume itself and a metaphor for change and transformation. The pose that Sandy Powell adopts is the classic stance of three quarter profile with hand on hip, similar to the promotional image of Tilda Swinton in Sally Potter’s Orlando, for which she designed the costumes. As a collection of works, the artist refers to the completed series as ‘Sadie Does Sandy’.

Also on display is a mannequin dressed in Sandy Powell’s shirt, tie and suit, which feature in the paintings. Sandy Powell wears blue, and blue mostly refers to the suit that Sandy is wearing (and not wearing) in the portraits. Her suit is an exact copy of the Freddie Buretti satin suit that Bowie wore in the video for Life On Mars and Powell’s hair is dyed a similar shade of orange to Bowie’s, underlining her connection to Bowie’s style from this era. Bowie’s / Powell’s suits also reference the blue satin of Gainsborough’s Blue Boy.

Blue is a significant colour in the relationship between Sadie Lee and Sandy Powell. They met when Powell bought a painting by Lee in the mid-90’s, which referenced Picasso’s blue period painting La Femme En Chemise. The work by Lee was a painting called La Butch En Chemise and is notable for its shocking blue background. Sandy Powell was a very close friend of Derek Jarman, for whom blue became symbolic and important.

In both rooms of this ground-breaking show, Sadie Lee continues her investigation into ways of presenting gender, and the constructed and performative nature of costume and stance through both dressing up and dressing down. Through her portraits Lee discusses and focuses on the shifting nature of binary and non-binary definitions of gender and identity and through her choice of sitters focuses on the people and the moments in our recent history that have marked milestone changes in the perception of gender that have changed and continue to change society.

The second room of her show will consist of a never-seen-before diptych of non-binary writer Libro (formerly Laura) Bridgeman. The piece is composed of two canvases, both portraits of Libro in the same pose, one in a thick herringbone suit and tie and the other naked after top-surgery. It was inspired by the Gwen John paintings of the artists’ model Fenella Lovell, where the subject is depicted separately in the same pose, both clothed and naked.

Sadie Lee will be joining us at New Art Projects on Saturday 27 November at 15:00pm to discuss her current exhibition in depth. The talk is free. Alongside Sadie will be non-binary writer Libro Bridgeman, who has sat for paintings featured in the show.
Share
Click on any image for full details