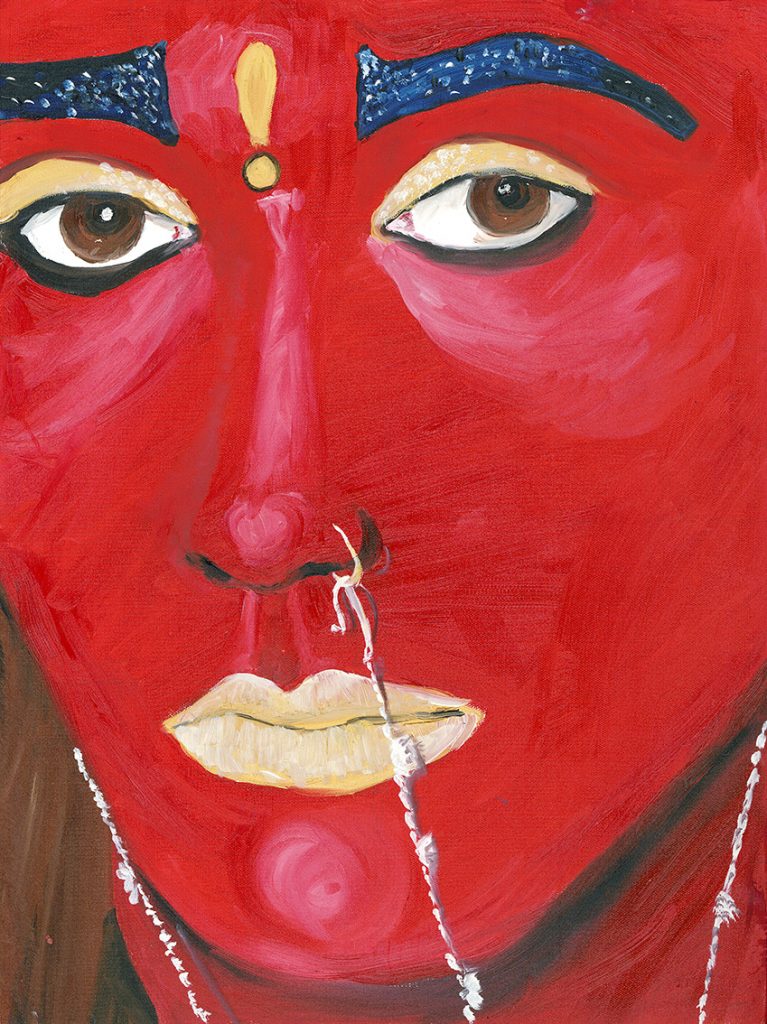 Sue Tilley was born in 1957 in South London, she was the muse and friend of the late fashion designer and performance artist Leigh Bowery and worked as the cashier for his notorious nightclub Taboo.
In 1990 while working in a benefits office as a benefits supervisor she began to model for Lucian Freud appearing in his world famous portraits Benefits Supervisor Sleeping and Benefits Supervisor Resting. She is the Author of Leigh Bowery the Life and Times of an Icon published in 1997. Since she retired from the dole office and encouraged by club impresario Wayne Shires, Tilley set up a studio and began to make oil paintings. Turning herself from model and muse to artist she has shifted her gaze from domestic items and things about her home to self portraits and portraits made in homage to artists she admires. Her drawings of mundane domestic objects became the runway star of Italian Fashion Week in 2018 when she was commissioned to collaborate with Fendi, who covered their collection with her drawings of a telephone, her cup of tea, a banana skin and a bottle opener, also featured were her bathroom taps. In 2019 Tilley collaborated with fashion designer turned sculptor Nicole Farhi and they bonded over their mutual friendship with Lucian Freud. The result was a show of sculptures by Farhi shown this year depicting Tilley. For her first solo show at New Art Projects the gallery has commissioned her to make a new series of paintings based on her memories of Leigh Bowery.

Dylan Meade is a painter, performance artist and film maker who was born in Ireland in 1991. He studied at Glasgow School of Art Graduating BA Hons in 2018. His work deals with pornography and the social body as well as homoeroticism of the male nude figure. His paintings are predominantly male nudes and the traditional surface of the painting is disrupted by plastic wrap, suggesting “top shelf” or obscene content, and also acting as a metaphor for sexual safety. The paintings feel like glimpses into a hidden world of desire, and permission, where the erotic has been unleashed. While at Art School Meade also made films. Breaking down student taboos, he created a series of explicit narrative and sexual works that encompassed a coven of gay witches, ritual sex magic and pornography. His film “Smoke Gets in Your Eyes”, has been shown at The Scottish Queer International Film Festival in 2018 and includes collaborative footage made with Lasse Långström in 2017. His groundbreaking work Robert + Dylan made with playwright Robert Softly Gale is a discussion on representing disabled bodies in pornography. It has been shown at MIX LGBTQ Film Festival in 2018 in Copenhagen and in Porn Film Festivals in London, Vienna and Berlin. Transformations at New Art Projects  is his first solo show of paintings. Transformations at New Art Projects  is his first solo show of paintings.

Fredrik Andersson is a ceramicist and illustrator who makes colourful ceramic pieces about homo eroticism and desire, since graduating from university he has regularly shown his ceramics and is stocked by Liberties of London. He has also worked with and run projects with Positive East, and The Outside Project. During the Transformations exhibitions by Dylan Meade and Sue Tilley, Andersson will exhibit some unique ceramic pieces and examples of his contemporary take on sgraffito entitled “graffito”.