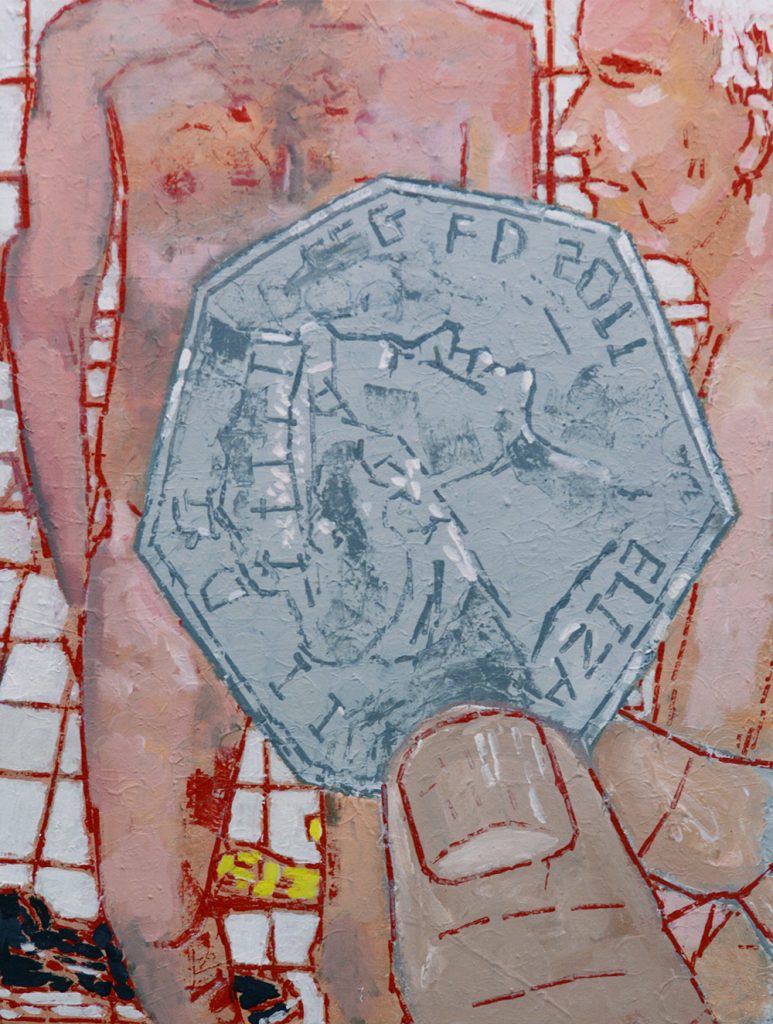 For his new show Hennessey has written a new comic about him visiting the doctor after spraining his foot and checking out a small blemish on his body. He has chosen to paint a painting for each page of the comic.

Adam Hennessey has curated an accompanying  exhibition –  And Beyond.  For this show he has brought together artists that he thinks about in relation to his own work. It is a discussion with his community of working contemporaries.

AHI learnt that from studying at Turps Banana, I think, and I really missed that interaction when I left.

NGPDo you think there will come a point when you won’t need anybody’s input? I am feeling that that point won’t come because it’s not about learning. I think this dialogue is something more. It is a part of how you approach work. Painting is something social for you.

AHThere is the difference between making and analysing your work, and I need to do the analysing part with other people. When you and Norman Hyams came by the studio we talked about how the canvases go between the wall and the studio floor.

NGPSometimes if there is a problem with them, you put them on the floor and step on them, making them disappear with your feet. We all experience having a medical problem that we are a bit embarrassed by and try to think it away. So maybe that is a similar thing you are doing with your paintings?

AH I like being mean to them and destroying them in quite a chaotic way.

NGPLetting this chaos in is a bit like letting other people’s opinions in. The other dialogue I was thinking of is how you very deliberately draw on your private life and use that in your work. You are using very personal things but it is not like a confessional art. It is not baring the soul and all about the suffering. But with yours there is an element of humour and

light-heartedness even though it might not be a light-hearted thing you are talking about. You are taking a step back from it and turning the event itself into an artwork.

AHDan Coombs a tutor at Turps Banana said you should make work that you are embarrassed by and I think I took that very literally. I found when I was writing the only way I could share the stories with people was to poke fun at myself at the same time. For this show ‘Blemish’ I wanted the paintings to link directly to the comic. So instead of drawing the comic I painted it.

NGPAre the paintings in response to a specific sentence in the story?

AH Yes, I write the comic first and the sentence is a starting point for the painting. I let the paintings drift and connect to other things and memories. If a painting works then I will adjust the sentence for it to fit back into the comic.

AHEvan Thomas from reading group (a group Nadja set up and we all go to) lent me a book by Scott McCloud called ‘Understanding Comics.’ There is a nice bit in it where the author lists various approaches, one where a different pictorial story will happen alongside the text and I want to try this out for my next show.

NGPYes, I see what you mean. At the moment you have text and a picture on the same page and together they are telling the same story. And in some more experimental comic books you get comics without text or different types of story lines happening all at once. You have similar things like this in writing. Where people will explore new ways of using the first person singular.

AHWhat is weird about making paintings about your life is that now normal life is more up for grabs. I bumped into the doctor just before the show. I invited him to the private view but felt I had to explain to him that accidently he was a big part of the show and I had written this comic about him. I’ve also been dating this guy recently and something funny and awkward happened to us, and he said ‘You’re not going to write a comic about that are you?’

NGPDo you know the book ‘I love Dick’ by Chris Krauss?  It is a story where she writes love letters to this guy called Dick. She doesn’t send them and then he kind of finds out. She does this whole literary project around this guy and her obsession with him. Does using part of your life in your Art have an influence back on your life and your subjectivity?

AH I haven’t really thought about that. I think I am self-editing my life in the comic. Which is a little control freaky perhaps?

NGP We all do it, all the time. I suppose we don’t always make an exhibition of it.

AH Haha, yes. It is almost like a conversation starter a conversation you might not have normally until you were all a bit drunk at the end of the night. I was really trying to make the pictures link to each other. To carry the idea that there is a story to be read.

NGP From one painting to another?

NGP Do you think that worked?

AH Yes, I think so. In previous paintings I would find something I liked painting such as a pencil, egg or finger and then bend and twist that. With this show I had to make up stuff more, things I couldn’t remember what they looked like.

NGPRather than doing something you already know how to do, you are searching more in them?

AHYes, In the painting ‘Ned’ I wanted grass. But I don’t have a technique down for painting grass at the moment, so I just scrubbed at that area a bit.

NGPI think that’s really nice though not having a technique for painting grass or making faces and finding them instead with the paint. I think it works well in the whole context of what you are doing this reliving, reframing of an experience, trying to work it out for yourself as well. By leaving these areas a bit indescript you are allowing the possibility of other narratives to be underneath or behind it. We can tell the same story in so many different ways. All of them would be roughly true.

AHAnne Ryan from Turps talks about wearing another painter’s shoes for a day.

I can see myself re painting the show in a water coloury way, just to see.

NGPYou work from a first-person singular point of view, talking about your experiences, your life so actually wearing somebody else’s shoes would be quite interesting because that would disrupt the narrative a bit. You play with being really open sometimes and really closing down at other times. You could be telling it in a different way. Another comic about the same story.

AHI quite want to condense this whole exhibition into one painting. I have been looking at a lot of Medieval Art and tapestry.

NGPYou could have a History painting or a tapestry and individual paintings in the same show.

AHYes! and a painting from the point of view of the Doctor.

NGPYou yourself can have different points of view. Such as if you told this story to your grandparents, or you were drunk or really happy. We have this fantasy of being a unified self but it is so not true. We are constantly different people, with the stranger on the tube, with the person in the shop. With different people that you know from different social contexts, with myself. If I have a headache I am different. Which of these narratives is the comic?

AHProbably the best version of myself. Perhaps it would be more interesting to explore one which criticizes me more?

NGPNot necessarily. You could make a fantasy version of yourself that responds very well in the face of seeing the doctor. Or another version where you are disappearing into the floor and hate yourself for months.

AHYes that’s brilliant. Dial up or down the responses or behaviours.

NGPIt has lots of different endings and then it just ends. Different possibilities all left as alternative endings. You can invent you own and nobody needs to know what is the real one.

AHI like the idea of an ending that plays out all of my anxieties. Accidently being naked, all of my teeth falling out and farting in front of the doctor.