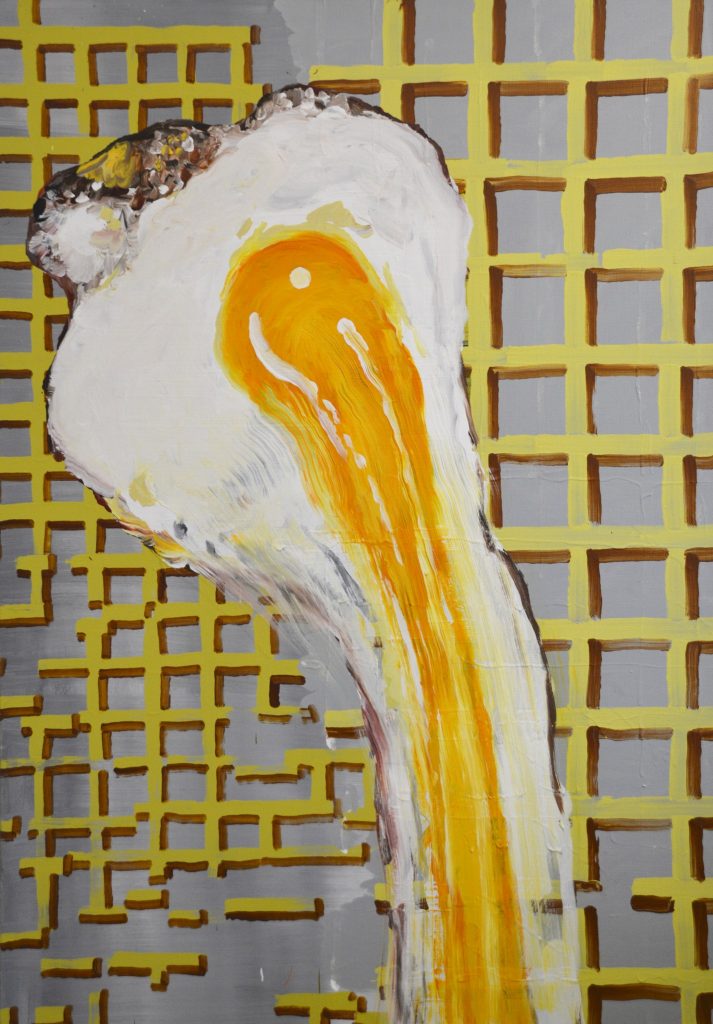 The paintings on show at New Art Projects are the culmination of works made over the past year especially for the space and explore in depth the themes that Hennessey has developed during his time at the Turps Banana Art School, London.

Hennessey is a very British painter, his small and joyful canvasses and works on paper examine and extend a certain kind of Britishness both in terms of how they are painted and in terms of the wry humor they display. Influenced by the colour palette of Prunella Clough, Ivon Hitchens and Paul Nash, these paintings share a fascination with mark making, and a creamy brush stroke that gives a beautiful and rich surface to the works.

Marcus Harvey observes “Adam Hennessey utterly embodies the essence of what the Turps painting programme is about, the total immersion in painting practice and intense dialogue with fellow painters”.

His compositions also make a nod to Philip Guston, his shapes are blocky with an almost cartoon like character and are playfully arranged in transitional spaces, part landscape, part surface and part fantasy. Hennessey describes himself “squishing large things into tight spaces”. ‘SMILE’ is a painting that takes its inspiration from this idea. Here a group of smiley face symbols are squished onto the canvas pushing their smiles around, and altering their expressions.

His titles and the relationship between them and his images have also led to comparisons between Adam Hennessey and David Shrigley. In “Eggy” a fried egg is sliding down the canvas across what appears to be some abstracted potato waffles. In “Seagulls” a group of birds peer through the hexagons of a football, and in “Man Hole Cover” a group of five elongated highly coloured index fingers stretch across the picture plane.

At the end of the exhibition on Saturday 4th March, the artist will hold a finishing party where a whole wall will be hung with 25 small sized paintings on Fabriano Rosapina paper, unframed each measuring 35 x 50 cm, each work will be sold at the event for £150 on a first come first served basis.

Last year Adam Hennessey finished a one year course at Turps Banana Art School and won the Darbyshire emerging artist award, he was selected for the Creekside Open and the Oriel Davies Open, and included in group shows at both the Herrick and Lubomirov/Angus-Hughes galleries and has had a painting added to the Groucho collection. He was shortlisted for the WW solo award.

Lives and works in London

2015: The Darbyshire Prize for Emerging Art