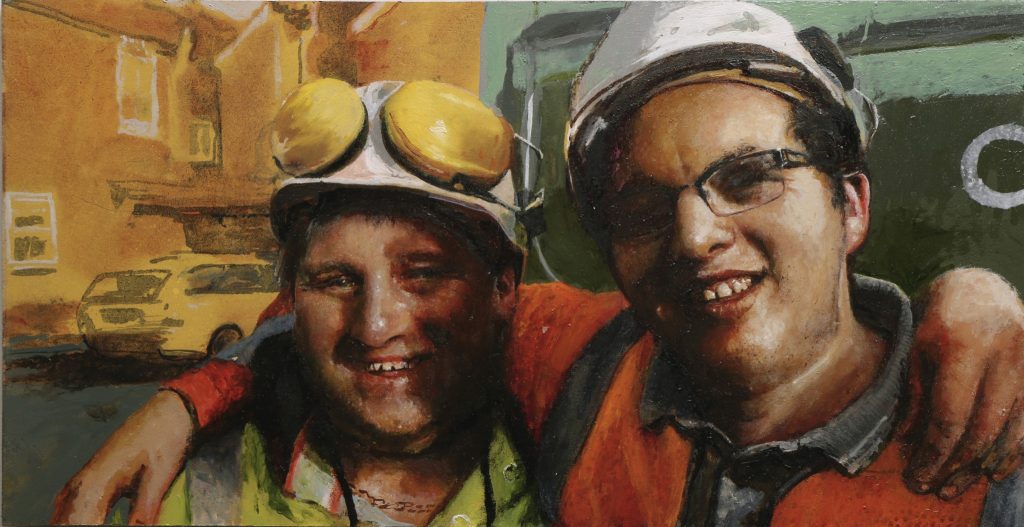 During 2017 and working in the shadows of the Brexit negotiations, James Crowther has taken a fresh look at the people who keep Britain moving. Not the businessmen or politicians, but the skilled and dedicated multi-job workers who make Britain function today. He has made a series of portraits of working Britain, illuminating the people who we once categorized as faceless “blue collar” or “manual” workers.

This is portraiture that puts a very real human face on canvas during a tumultuous period of political uncertainty. In a world where we face difficult global questions, and social divisions and mobility are at the forefront of debate, Crowther’s intent was to document and celebrate the people who work below the city, in the train tunnels below London with terrorism posing a daily threat, the women and men who look after other peoples children whilst they work, the barber, the cleaner, the builder, the labourer and the barista.

These works continue a valued tradition of documenting manual and menial workers. In the nineteenth century this was apitomised by a new realism in painting that strove to depict social norms, as with Gustave Courbets “Stonebreakers” and Gustave Caillbottes “The Floor Scrapers”, and as a clear dissection of society in Ford Maddox Brown “Work” which depicts manual labourers installing drains and sewage in Hampstead in 1863/5.

Crowther also references more contemporary documents of social change such as the East End paintings of Dan Jones who made vibrant street scenes of Stepney and its multi-cultural landscape in the 1970s. Similarly, James Crowther has observed the rich social makeup of pre-brexit London. Many of his subjects are immigrant workers, both first and second generation to the UK, many of whom are questioning their place here in British society today and thinking about tomorrow.

As lines of division are drawn harshly by an unsympathetic political process that focuses of ideas of National Identity, these works hold up a valuable mirror to social reality, of whom and what are actually around us, what matters and what that might mean for the future.

LAUNCHING our two new exhibitions at the Gallery

Cyberbilly is the best way to describe Sonny Eriksson’s fusing of rockabilly and psychobilly styles with the hypnotic,strange and electronic sounds of today and beyond…This self-styled Teddy Boy Timelord armed with a laptop and a mean gretsch guitar swaggers down the information superhighway to source the most rockin’ elements from 1955-2025 to bring you Sonny Eriksson live ….