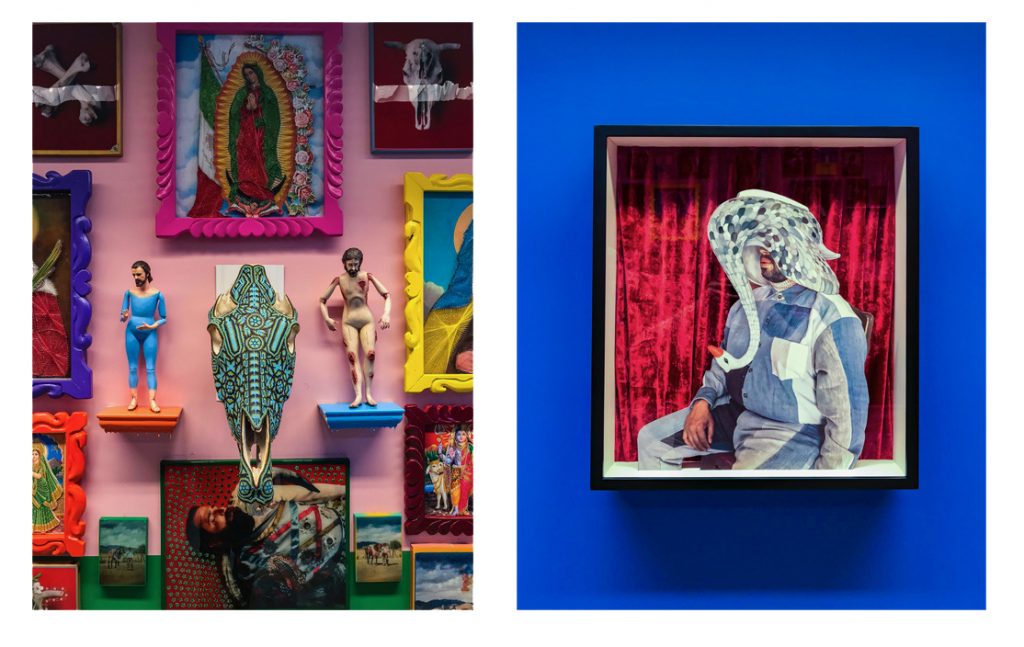 The two main components of The Referential In-Between for Spring Break’s, 2018 theme STRANGER COMES TO TOWN will be made up of selections from Brian Paumier’s body of work ‘Act Of Faith’ and Joaquin Trujillo’s new body of work El Viejo. The Referential In-Between takes on a emotional cross cultural relationship combined with these shared and conflicting heritage experiences. Both bodies of work have the common denominator of shared and different religious traditions and ritual.

Brian Paumier takes his inspiration from his questioning his identity, heritage and community, viewed through the lens of his enchantment with Mexican-American culture. He grew up in Oxnard, a Southern California suburb where two-thirds of the population is Mexican-American. As an Army Veteran, through melding his childhood memories and his experience as a soldier in Iraq he invites us to question the ritualistic constructs ofmasculinity and culture within contemporary society.

The Act Of Faith series began in the heat of battle with a promise to the Virgin of Guadalupe. In a moment of desperation, Paumier made a deal with the Virgin of Guadalupe, with his santo: “If you get me out of this, I will make you a manda for all your help. Por favor, Mi Lupita.” As a result the images in Act of Faith are repeated ritualistically, like religious icons, commemorating his childhood idols and pivotal life events. They appear in a multiplicity of forms he calls “cuadros”. These two-dimensional assemblages adorned with stickers, glitter, spray paint, and floral appliqués are mounted to panels and covered in a think layer of resin.  For his presentation made for Spring Break, Paumier has embellished these unique installations with beaded skulls and motifs taken from Mexican craft tradition.

The Act Of Faith of work seeks to personalize the political, and celebrate connections, differences and beliefs that are shared and differ between American and Mexican culture. The relevance of this intervention stands out as an act of faith to protect the shared cultural benefits in a diverse America, today.

Brian Paumier was born in Oxnard California. Graduating from Art Centre College of Design Pasadena, California in 2000.work is profoundly autobiographical. He maps his eclectic personal history through portraits and still life. He draws freely from his memories of influential family and friends, Mexican culture and traditions and his experiences as a soldier and life as an artist  growing up in Oxnard, California. Balancing extremes and exposing rituals he celebrates the essence of culture in an effort to collapse stereotypes and preconceived ideas. His practice is intercultural and his approach interdisciplinary, filled  with deeply personal but universal narratives. His lens based work chronicles one man’s quest for identity, masculinity, and equanimity. He received his MFA from ICP/Bard and his BFA from Art Center College of Design. His work is in various public and private collections including the Metropolitan Museum of Art in New York, The International Center Of Photography, the 21c Museum Hotel, and Beth Rudin DeWoody collection.

Joaquin Trujillo, is an artist and the youngest of eleven siblings, raised in a small town on the outskirts of Zacatecas Mexico. At the early age of 12 he left his home for Los Angeles where he lived with his brothers in a one-bedroom apartment. Building upon the dichotomy of his Mexican heritage and American education, he weaves together an uncanny modality of childhood innocence across culture, place and time.

About El Viejo Trujillo states “As a child I couldn’t believe my eyes: “El Viejo levitated, he possesses super powers!” El Viejo (The Old Man) is the scape-goat element in a traditional Mexican dance procession. He provides safe passage for the other dancers and pilgrims for their arrival to churches, temples and cathedrals. His appearance is ridiculously scary and extremely loud. The best outfits he wears are fabricated from home made items and re-appropriated clothing and rags full of cascabeles (rattles), mirrors and bells and he carries whips and cloth baby dolls that serve as a reminder of both control and order, and to what might happen to you if you cross him. Old hats and a wooden masks carved with the face of a villain in popular culture, a refection of ones own sins. In the procession he conducts pantomime exorcisms of evil spirits making terrifying stares and loud obnoxious sounds to clear a path for the vulnerable participants. This well rehearsed performance provides much needed comic relief.

For The Referential In-Between Trujillio incorporates this persona in performance, photographs and videos. Trujillo explains, “I have taken on this tradition and created my own magical version of the Viejo character. I am providing safe passage for my procession through life I represent a contemporary fantasy guardian who reveals himself and comes out and exercises his own special powers. My gaze as the artist is now made up of a glimpse through the wooden eyes of the Viejo’s mask. Transformed I have now become the fiction, I am now levitating and saying “I am El Viejo”

For Spring Break Trujillo has also made a special edition Fotoescultura,  a Mexican folk art form that flourished from the 1920s to the 1980s. Commissioned from traveling salesmen to honor individuals, commemorate events, or memorialize the dead, fotoesculturas consist of a hand-tinted portrait photograph, adhered to a shaped mount and surrounded by an elaborate wooden frame. Sold primarily in Mexico as well as in Mexican-American communities, they were particularly popular during and after World War II, with families memorializing absent relatives.

digital archival print hand painted mounted with a velvet backdrop, no.1 in  limited edition of 10.